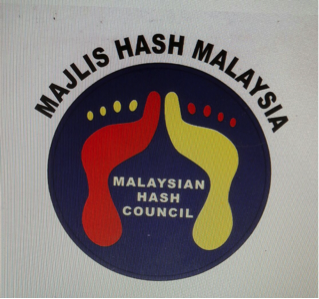 Tribute to Alex Thomas  “The Bear”

Alex started hashing in Penang in the early 70’s when Nick the Turd was the
Grandmaster of Penang Hash House Harriers. He was a guest but that first
experience got him hooked, line and sinker on Hash.

In 1977, together with Toda and Allan Chee B…, they founded PJ Hash House Harriers @ Animales. Bear came into full bloom where he shone as its first and long serving GM. He was a star on the box with his wit. His life then centred around hash.  To Bear, Hash was his life. However,when the Animales runs got tougher and longer,  Bear’s attendance at runs became less regular.

In 1991, he became a reborn again hashman when he founded PJ Hash House Hazards. He was the first Grand Hazard and today the Hazard movement has become international,
having expanded to 13 chapters in Malaysia, Indonesia and China.

In 1996, he was instrumental in forming the Malaysian Hash Council and was elected the Chairman. The Malaysian Hash Council initiated the Malaysian Nash Hash as a fund raiser for the Interhash ’98 Bid. The bid at Cyprus in 1996 was successful and the ’98 Interhash made history when it had the largest attendance of 5,800 paying hashers from all over the world to celebrate 60 years of hashing. In fact, the attendance at the ’98 Interhash surpassed the Commonwealth Games which was held a week earlier, having 5,000 officials and athletes.

To Bear, Hash was a religion, all hashers are brothers. He has no qualms in
borrowing money when broke to help out a friend who was in need of funds. Of
course, time and again, his kind and generous nature was taken advantage of to
his detriment.

Bear innovated hash circle rituals, created many hilarious punishments. Famously, he
would introduce himself on the box ” I THE BEAR LORD OF THE DAMANSARA
JUNGLE, CHIEF CARRIER OF AIDS,  LIGHT IN THE JAMBAN FROM THE ROYAL LEANAGE
OF PUDUKU….HEREBY COMMAND YOU TO SILENCE”

He was a master in hash circles and truly a born Grand Master. His early demise in
Yr…… robbed the Hashing world a ‘true blue’ hasher.

Alex Thomas has been running between six and eight kilometres a week for the past 27 years and is still going strong.

He started his hashing activities with the Penang Hash House Harriers in 1969. To date, the 51 year old father of a child, has run more than 22,000 kilometres.

His desire for fun and adventure was cultivated by his parents. “My parents impressed upon me the need to be fit and they steered me into sports and games” said Alex who is known as the “Bear”.

Today, Alex has much to thank his parents for as today, the Bear is one of the more well known hashers in the country. He has participated in 80% of the 110 hash chapters in the country and also has taken part in the invitation runs in Indonesia, the Philippines, Australia, New Zealand, United Kingdom, United States and Cyprus.

Alex says there is a inner force in him to make hashing more exciting and dynamic. “Hashing is in my soul and I’ll continue to hash until I dropped dead” said the Bear.

Alex was the inspiration in setting up the Seletar HHH in Singapore. He is also the co-founder of the PJ Hazard and the PJ HHH or otherwise known as the Animal Hash.

Basically, there are three pre-requisites to qualify as a member of the Hazards which is only for the men. The three eequirements are:

Members must be over 40 years young

He must have a girth of 40 inches and above

“The third requirement is a must” Alex said jokingly.

He added that Hazards is reckoned to have one of the best circles (Post run activity) where a member is punished if he had either littered the running trail, trampled on culticated crops or caught eating or throwing food in undesignated areas. All those who have flouted the rules will be hauled up on stage and then asked to sit in ice blocks. The time varies according to the severity of the offence.

It’s a different experience running in the hash run. It takes the runner through all kinds of terrains – hills, valleys, thick undergrowth, waterfalls, rivers and so on. One run which bear fondly remembers is the Bukit Mertajam HHH Invitational Run where he lost his way midway through the run and was trapped in a jungle until 1am.”But I managed to find my way back to the finish point where some 10 members were keeping vigil” Alex said.

He added that he has only missed about six runs either through illness of if he was overseas. He also said that he could go anywhere in the world as there is an international hash directory where upon visiting a country, they would look up the hash chapters and its members would come and pick them up and provide them food and lodging. We call this hash-pitality. We reciprocate too when others visit Malaysia.

The Bear was the Grandmaster of the Animal Hash for 13 years and is currently the Grand Hazard of the PJ Hazards. He is also the Chairman of the Malaysian Hash Council.

Alex said he has been able to maintain good health because of hashing. “God willing, I’ve not succumbed to any major ailments,” he said adding that he aims to keep on running and running..

A Tribute to Uncle Looi

Uncle Looi, was the oldest active hasher in Malaysia until his
departure to Hash Heaven. I have known Uncle Looi for a long long
time and have never considered his age when meeting up with him. To me he was
forever young and age was not a factor if you had seen him bare bodied
completing runs which I SCB although he was some years older.
He epitomise a true blue HASHMAN, actively participating in
celebration runs near and far and always with a cheerful laugh and a loving
word to those he met. We miss you Uncle Looi as you join Hash Heaven Harriers
with your preprocessor Alex the Bear your co founder of the Malaysian Hash
Council ONON!

“The late Looi Nai Boon was introduced to the hash
fraternity by his teaching colleaques and attended his first run as a guest
with Kota Melaka HHH on 25.5.1979. On 29.6.1979 he became a member and was
baptised as “Grumpy Looi”. He was elected to the Committee as an Assistant Hash Cash in 1980. Not satisfied with hashing once a week, he then joined Malacca
HHH and became their member and was elected as On Sec in 1985. On 1.9.1980 he and 3 others founded Batang Melaka HHH and was their first On Sec.” Hope
the above will complete your write up of late Looi.

A Tribute to M.G.R Murugan

MGR was an avid sportsman whose main interest was long distance running and
football. His first flirtation with the Hash began in Selama in 1986 when he
revived the dormant Selama H3 and became their 2nd Grandmaster. From that day,
he never looked back, instead he became a hash ‘addict’ and worked tirelessly
to put Selama H3 onto the hashing map by exposing his young charges to
experience numerous celebration runs around the country and world.

MGR was Malaysia’s Hashing Ambassador. He was a familiar face at weekly,
celebration and major hash runs in Malaysia and around the world. An icon of
hashing in Malaysia, he was highly respected. Indonesia Hash bestowed upon him
the title of ‘Bapak Hash’ and the Indonesian Hash Council always referred to
him for advise and even ensured that he sat at the main table with their
council members during their Pan Indo Hash meetings. In Malaysia, he was
appointed as a Trustee of the Hash Heritage Foundation.

His passion for hashing is unmatched and armed with his experience, he became the Chairman of MHC at the 6th Nash Hash in Sandakan, 2004.

His other passion was towards charity. He donated generously, without batting an
eyelid. He always had a ‘big’ heart and word ‘No’ was not in his vocabulary.
His charity to religious places of worship and to the unfortunate is renown. In
fact when the OC of Pan Asia Hash, Bandung
informed him that they are donating ‘wheelchairs” to the unfortunate, he
immediately sponsored 10 wheelchairs.

This is MGR Murugan, an icon of Malaysian Hashing, dearly missed by all.